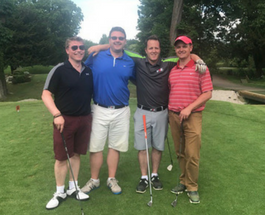 Buckinghamshire Golf Club once again opened its doors for the annual Global Recruiter Golf Day, and what a great day it was. The sun was shining and there was lots of fun to be had.

Voyager’s Paul Thompson and ISV’s David Little were accompanied by their friends at Fre Clothing, who proved themselves to be real assets out on the green.
Although Team Voyager wasn’t lucky enough to be crowned the winners, the boys came a respectable 4th, which was excellent considering such tough competition.

Last but not least…

A huge well done to ISV’s very own Head of Customer Services David Little, who won the competition for the ‘Shortest Drive’ and was awarded two bottles of bubbly, plus two complimentary tickets to TREC 2017, courtesy of the REC.

Thanks to the Global Recruiter for a great day and we look forward to competing again next year!

CHECK OUT THE VIDEO BELOW…